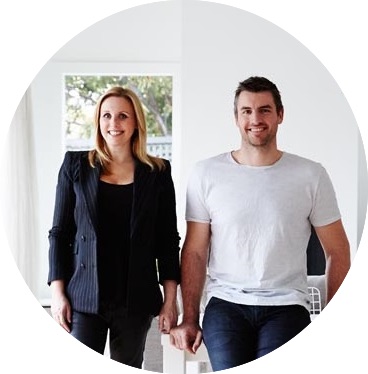 Darren and Dee Jolly - competitors on season nine and ten of The Block - sold their controversial Kew East Renovation two years ago for $2.908 million, $58,000 above reserve. Now it’s back on the market - and you can have a close-up sticky-beak at their beautiful reno work.
The house - which made headlines after it was found the couple had knocked the original home down illegally (after paying the fine, the Jollys re-built the facade, as was their original intent) - hasn’t changed much since the pair sold it to work on new renovation projects in Melbourne’s Mornington Peninsula.
Harcourts Surrey Hills director Brett Philipp told News.com the new owners had since outgrown the revamped four-bedroom California bungalow, and were hoping to list the property - which is set to go under the hammer next February - with a sale price of  $3.2-$3.5 million.
Dee and Daz spent twelve months rebuilding the house, situated in leafy and desirable Kew East in Melbourne' Inner East, which they purchased in June 2015 for just $1.395 million.
Much work was needed to bring the home - which boasts a stunning interior, pool and established landscaped gardens - up to a high standard.
The Jollys have since renovated one other property, and are currently working on their most recent renovation, also in Melbourne’s Mornington Peninsula region.
Take a look at some of the gorgeous photos here:

Images with thanks to Harcourts.

Posted in Home Inspiration and The Block