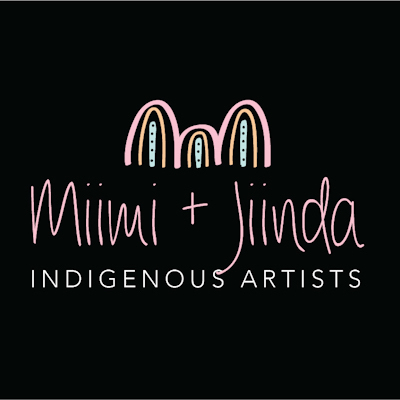 Miiimi & Jiinda is a new Australian Art business, founded by Aboriginal mother and daughter, Lauren Jarrett and Melissa Greenwood, which was established to not only create beautiful sacred artworks, sharing their rich cultural history, but to also implement change by creating national projects. Launched on Instagram in late 2018, Miimi & Jiinda’s traditional and contemporary Aboriginal artworks and hand woven baskets have won fans all over Australia. Known for its bright and distinctive style, Miimi & Jiinda creations tell visual stories about country and kin from the oldest surviving culture in the world.

Melissa and Lauren are Indigenous Australian artists hailing from the Gumbaynggirr, Dunghutti and Bundjalung tribes of Australia’s East Coast. Often referred to as “Saltwater Country”, their ancestral homelands are some of the most beautiful oceans, rivers, sub tropical rainforests, mountains and majestic waterfalls in the country, situated from the northern end of Byron Bay down to Kempsey in New South Wales. Lauren and Melissa are traditional owners of their ancestral homelands and proud custodians of the oldest surviving culture in the world which dates back to “time immemorial”, meaning time extending beyond the reach of memory.