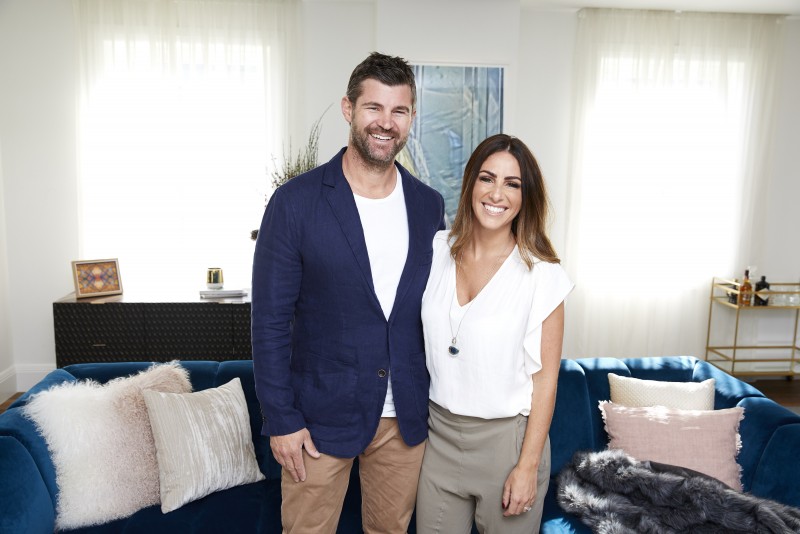 Hayden and Sara in their beautifully completed apartment number 3.

How do you feel going into this week’s Auction?
I think we are more excited than feeling sick with anxiety. It’s been a pretty rocky road for us, so we’re pretty happy to get to the auction, you know what I mean?

It sure has! You guys got $25k off your reserve through your Challenge Apartment wins - that must make you feel a bit less stressed?
Yeah, that was a really good little earner at the end. It’s an advantage, but we still believe there is a bit of a competition going with the top floor, and the rest of The Gatwick. So, to have that little bit extra, to put towards the differentials, it’s going to help for sure. But who knows what’s going to happen on the day - you don’t know how many buyers there are going to be. That’s the bit that’s making us most nervous - wondering how many buyers are going to be there to challenge each other to get the best price.

Hayden felt "the Challenge Apartment was probably a little bit easier, in terms of style, because it was very modern, and edgy".

The judges really loved the rooms you presented in the Challenge Apartment. How did it make you feel, ending on that kind of high?
That was really good, actually. I think ending like that was great for our confidence, and knowing that we grew during the show. The Challenge Apartment was probably a little bit easier, in terms of style, because it was very modern, and edgy; that ‘St Kilda’ vibe they asked for. So it was probably a bit easier than doing a ‘Modern Luxe Deco’ approach. Either way, it was great to have some better feedback from the judges, and get that money off our reserve, which can only help us.

You guys had the hardest space to work with, with that hallway. Congrats on delivering all those spaces!
We got there, and we got a really good result - but if anyone should have been able to complete those rooms, a Project Manager should have been able to get them done. I was actually happy to take on that challenge in the end, and just really push to get it all finished, so we could show everyone we could do it. I think it was pretty good for us to get through that.

"We tried to just put some humour into some of the situations, so that people could understand that we’re not like that every day of the week." Hayden told Insider Style.

Has the show been a positive experience?
It’s definitely been a great experience for us. We grew a lot as a couple - only being married for not even six months, we definitely experienced a lot of stressful times, but we definitely know now how to do a renovation together now, that’s for sure!

How have you coped with some of the criticism on social media?
Yeah, that has been difficult, the backlash on social media. But The Block is an experience in itself - it’s not everyday life for us. We tried to just put some humour into some of the situations, so that people could understand that we’re not like that every day of the week. We do have very good banter, we are always fun with each other - obviously we have had some stressful experiences along the way, through Sara’s pregnancy and things, but we got through all that. And now we’ve been through The Block, we know how to deal with negativity on social media, so I don’t know what else is left for us?

Looking back, what were your best and worst moments on the show?
I think our best moments were getting good results in some of our rooms. Winning the 48 Hour challenge was a buzz, and getting to the end of the build, and getting the terrace done; being able to complete the look and feel for our apartment was great. We were really happy to have it all completed. We weren't expecting the challenge apartment to be thrown at us, but we had to back it up and get back in there and have another go. The finishing of that at the end was another high for us - and for everybody. To see the whole Block finished after that - it was such a big production to be involved in.

Hayden and Sara knocked it out of the park with their gorgeous terrace. All three judges were unanimous in their praise, particularly Neale, who said he thought The Gatwick had never looked more elegant in its 80 year history.
Sara and Hayden spent a long time planning out their kitchen space, re-orientating the island bench to take full advantage of their stunning views, and to link the room with the rest of their living space. It was a risk - but it paid off.

What was the hardest bit?
The hardest bit was having the energy and the focus every day. I found every Monday after not sleeping on Saturday night really tough. Because we just were so drained from lack of sleep from the week before. And then you’re thrown into the next week straight away without even a break.

Yep - it’s pretty tough alright…
And also not being able to spend any time with [daughter] Harlow. We only ever had two or three hours with her, on a Sunday afternoon, which was better than nothing. It was something we really looked forward to every week, like a prize, to get time with her. But unfortunately we were so wrecked from the week, and having to stay up painting all night on Saturday night, it was hard to have good, quality time with her. But anything was better than nothing.

Lastly, what has been going on since the show finished filming?
We had a short holiday with Harlow and went to Fiji for 10 days, which was nice. That was straight after we finished filming. Then I slowly got back into getting my business up and running. We have started our own project that we had put on hold in Sydney - I’m almost finished the excavation to start rebuilding our house. So we are well underway there - it’s been about six weeks of excavation to get down to the right levels. I am hoping we can keep moving with the construction towards Christmas, to put us in a good position to keep building next year. If we win a little bit of money, that will help, in terms of not having to borrow so much.

Everything's crossed for you both this weekend! Good luck, Hayden and Sara - we've loved watching you.

Take a look back at Hayden and Sara's apartment HERE