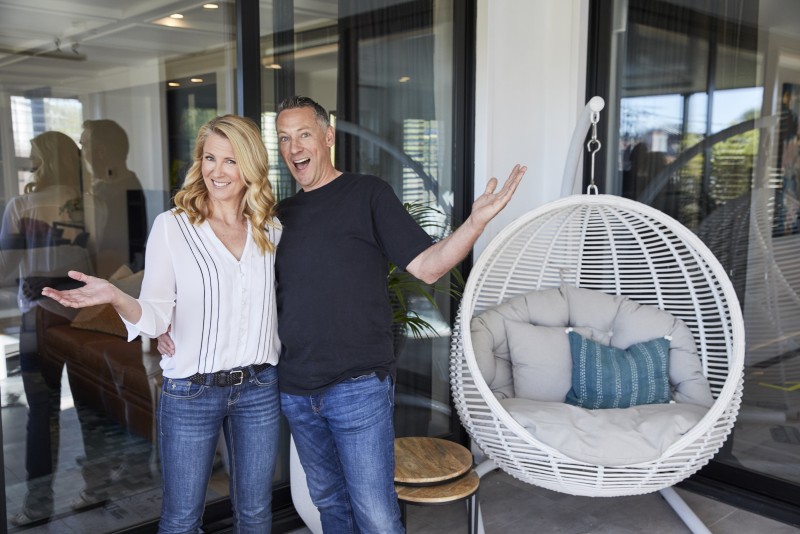 We chat to Kerrie and Spence about their amazing Block journey...

Kerrie and Spence looking fresh, way back at the start of their amazing Block journey.

So, tell us guys - how confident do you feel?
Spence - The feedback has been incredible, from pretty much everybody - we’re wrapped with what we’ve presented, and with the final product.
Kerrie - Everyone’s feedback has been really encouraging. But when you think about auctions, anything can happen on the day. And I feel sick.

Oh Kerrie - you poor thing. What have your real estate agents been saying?
S - We’ve had a few people come back three or four times - and very positive. But we are not getting overly excited until it’s all over. Because you just don’t know what happens on the day. Like, a Block auction is a bit different to a normal auction. So finger’s crossed.
K - Whatever happens on the day, we have no control over, whatsoever.
S - At the end of the day, we know we have built a beautiful apartment. And hopefully someone falls in love with it.
K - Hopefully three or four people fall in love with it!

We knew Kerrie and Spence were ones to watch after revealing this incredible room and THAT ceiling in the 48 hour challenge.

Shelley Craft is certainly a fan - she says you have her favourite apartment...
S - That’s brilliant! I didn’t realise that. I have been in the building game for thirty years, and in the top-end building game for 25 years, and I know we have built a good product, and a beautiful apartment. I hope we get someone who appreciates the effort we went to. And the effort we went to in getting the quality as good as we could, in that time.

You guys managed to score $15k off your auction reserve in the Challenge apartment. Does that make you feel a little more confident?
S - Well, for me the 15k is pretty much one bid. And it could come down to $1! Court and Hans did well getting $40k off theirs. But we did get told, day one, that ours would be the lowest reserve out of all the apartments.

Did that have a bearing on why you took Apartment One?
S - Absolutely. But that was only one of the many reasons. The other thing we did get, was the highest depreciation value for investors. So, having the lowest reserve, and the highest depreciation value, if an investor is buying it, technically you couldn't ask for more than that.
K - We have got a one in five chance - that is the way we see it.

Kerrie and Spence wowed the judges with their perfect score kitchen, tricked up to the nines with top-of-the-range Gaggenau appliances, a hidden rangehood, those amazing Sub Zero fridges, and an exceptionally executed Butler’s Pantry.

And then there’s those two very different Penthouse apartments
K - That’s right. The penthouses will have different buyers to the real Gatwick, so I think that spreads us around, and gives us more of a chance. But still, you just don’t know.

Looking back, has The Block been a positive experience?
S - Yeah, by far. And it’s funny, we are actually really enjoying watching us on the show now. Whereas earlier weeks it was kind of awkward, and some of it was hard to watch, it’s good fun now. And you can see us having a good time on the show. We finished on a really big high, so it was good.

What was the turning point in the competition, in terms of your mindset?
S - It was probably the week after living/dining - kitchen week, actually. We actually had a good team onboard. We had a really good, reliable team, who were prepared to work hard. They were all there to help us, so that enabled me to step back and not take on as much.

"We finished on a really big high." Spence and Kerrie had plenty of fun on, and off, camera, especially towards the end of their Block experience.

If you had your time again, would you have still decided to do all that building work from the start?
S - I would say, yes. There are no regrets from my point of view. If I had gone into the show, and got a builder from day one, I don’t know how that would have played out for me. I look at Hayden, and he never put a nail bag on, and was on the phone the whole time. There was no way in the world I wanted to be that person. I wanted to get in there and do stuff.
K - You had a sense of ownership over your build. You wanted to contribute, and make it the best you could. And wear you hand that out, you don’t have that same passion for it, if you don’t have that responsibility and care for the job.

Looking back what were the best and worst moments on the show?
S - The worst was the lounge/dining week when I basically shut down. And just stopped functioning.

That was hard to watch - but it started an important discussion about depression...
S - That’s right, and so many things have come out of it. Even to the point where, World Mental Health Day, I went and did my first talk in front of some people about stuff. So that will be something that once the show finishes, I will probably get involved with a bit more.

The team after the second-last Tools Down in the Challenge Apartment. Kerrie and Spence say one of the best parts about The Block was getting to work with their mates.

Lastly, how do you think you’ve changed as people since the show?
S - We are still the same - we haven't changed. But I do feel now that after what we went through, we can physically and mentally do anything now.
K - It’s certainly made us realise the strength in us. Not just as a couple, but as individuals as well. Because we just could keep going, when everything in our body and head screamed to stop. We realise we are a lot tougher than we thought.

Everything's crossed for you both this weekend! Good luck, Kerrie and Spence - we've loved watching you.

Take a look back at Kerrie and Spence's apartment HERE