It’s the biggest week ever, as our Blockheads race to complete their hallways, stairs, laundries & powder room.

Jimmy and Tam are best friends with Luke and Jasmin on The Block, but that friendship might be tested this week as they took out the win over their neighbours after using their bonus point gnome.

That’s not taking anything away from the Brisbane married couple, who produced a number of stunning spaces in Hell Week that the judges loved.

Entering House No.5 the first thing the judges saw was the Suncorp game changer vintage chandelier and perhaps Shaynna summed up the beautiful addition to the house best.

“It is stunning,” she said. Darren was impressed with the terrazzo floor in the hallway, the ribbed, panelled wall in front of the laundry and the “lovely” colour palette.

The only negative walking into House No.5 for Neale was the console table inside the door.

“Why is this glass cabinet here with this Alexander McQueen book by the door of the house, it feels like it’s part of a shop or a showroom,” he said.

All the judges were a fan of the MyPlace home automation system, another huge value add for Jimmy and Tam for House No.5.

The laundry was generous in size and Shaynna loved it had the same mint green colour as their incredible kitchen.

The powder room was simple and well-executed according to Neale.

The mirror from reminded the judges of a 1950s TV set, once again they have nailed the era brief.

In summary, Darren was full of praise for Jimmy and Tam.

“This is one of the most unique homes that we have ever seen delivered on The Block,” he said.

“There are so many ideas that could really go wrong that have come together so well.”

Jimmy and Tam really had no choice but to use their gnome, taking out another $10,000 for yet another win.

They obviously couldn’t wipe the smiles off their faces.

“We are so proud of this week, which is probably one of the toughest on The Block,” Tam said.

“It’s so lovely to see everything come together and get positive comments like that again from the judges.” 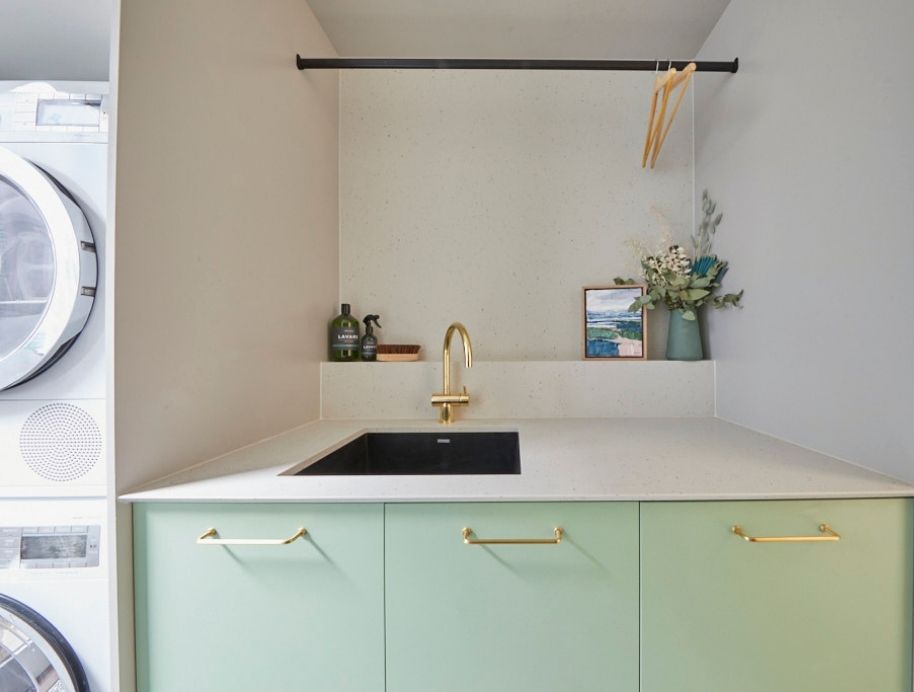 Jasmin was devastated after missing out on the win and she didn’t hide her emotions, storming out of Scotty’s HQ.

“That f…king gnome,” she said after Jimmy and Tam took the win after using the gnome they won in a challenge.

You had to feel for Luke and Jasmin from Perth after they definitely got the best comments from the judges for their beautifully designed and thought out spaces this week.

Walking into House No.2 Darren, Shaynna and Neale loved the chevron timber flooring they saw as soon as they entered the beautifully restored leadlight door. 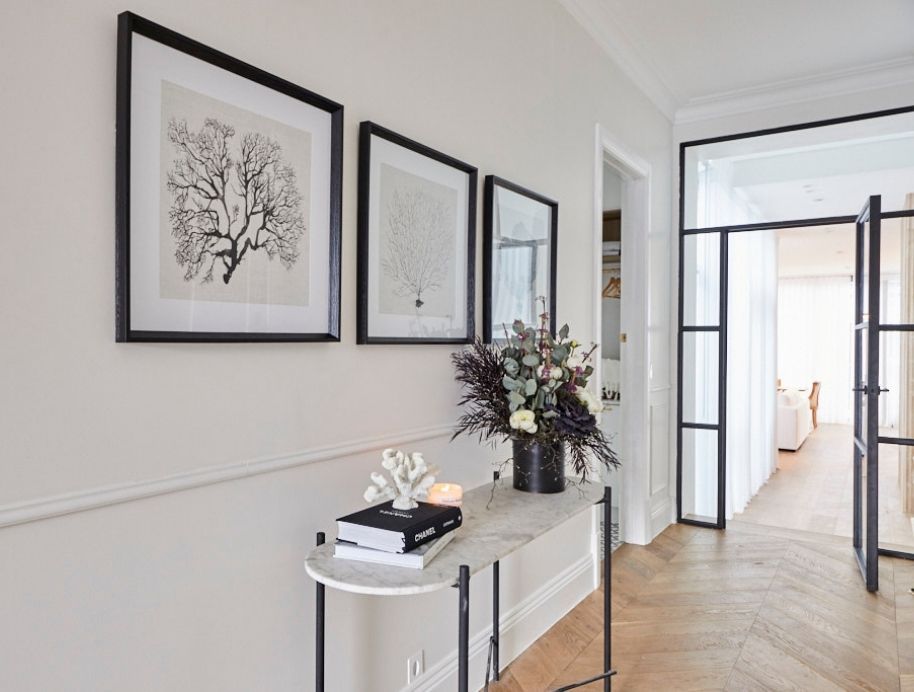 The artwork on both sides of the hallway was lovely.

Darren loved the oval-shaped marble console from Globewest and the choice of colour palette.

“This is everything I loved from next door with a lot more finesse,” he said.

They loved the impact of the powder room.

“I love the wallpaper”.

The hand soap from Darren Palmer was also a hit, obviously.

“Ten out of Ten,” the man himself joked.

The gold tapware from was perfect for the 1910s brief that Luke and Jasmin really struggled to nail at the beginning of The Block.

The huge laundry with a drying cabinet was faultless, and the storage under the stairs another value add.

All in all, a brilliant week for Luke and Jasmin.

“Luke and Jasmin have the most quintessential, Brighton, modern family home of all five,” Darren said.

So while there were a lot of positives, the fact they didn’t take out the win was a huge downer for Luke and Jasmin.

“It just would have been so nice as we thought the spaces were just perfect,” Jasmin said.

“Hopefully it will be our turn next week.” 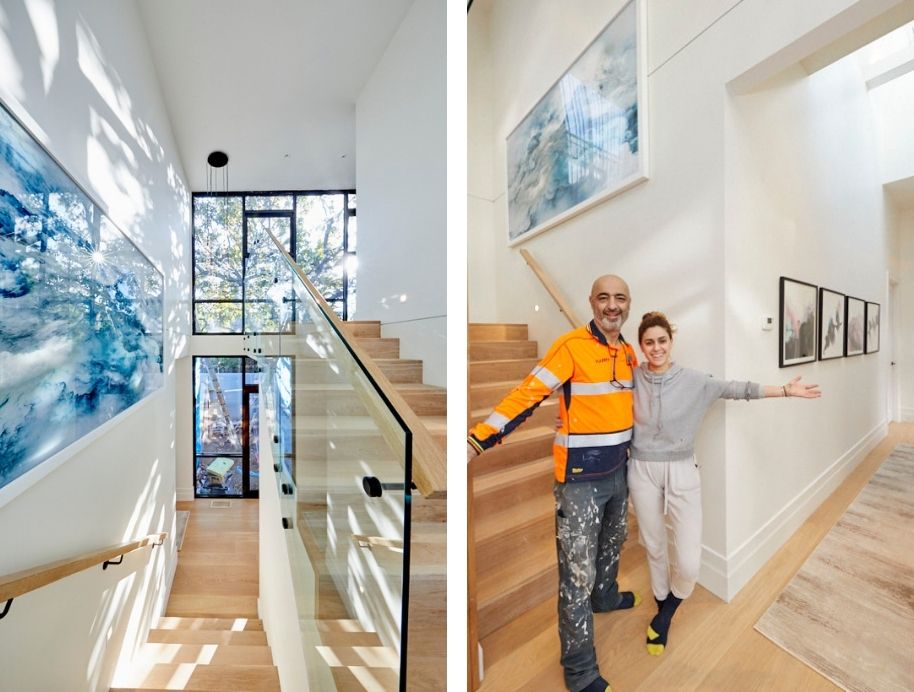 Entering House No.1 using the facial recognition technology got things off to a good start for Harry and Tash for Hell Week.

A dramatic impact was immediately felt for the judges when they walked into the foyer for House No.1.

Darren in particular loved the entrance.

The dramatic impact of the architecture was something Harry and Tash worked hard on.

“I’m hoping we have done the house justice, with the architecture we had to play with,” she said.

With 24 skylights by VELUX now installed in the 1920s house, Tash has given Dirty Harry a new nickname – Skylight Harry. 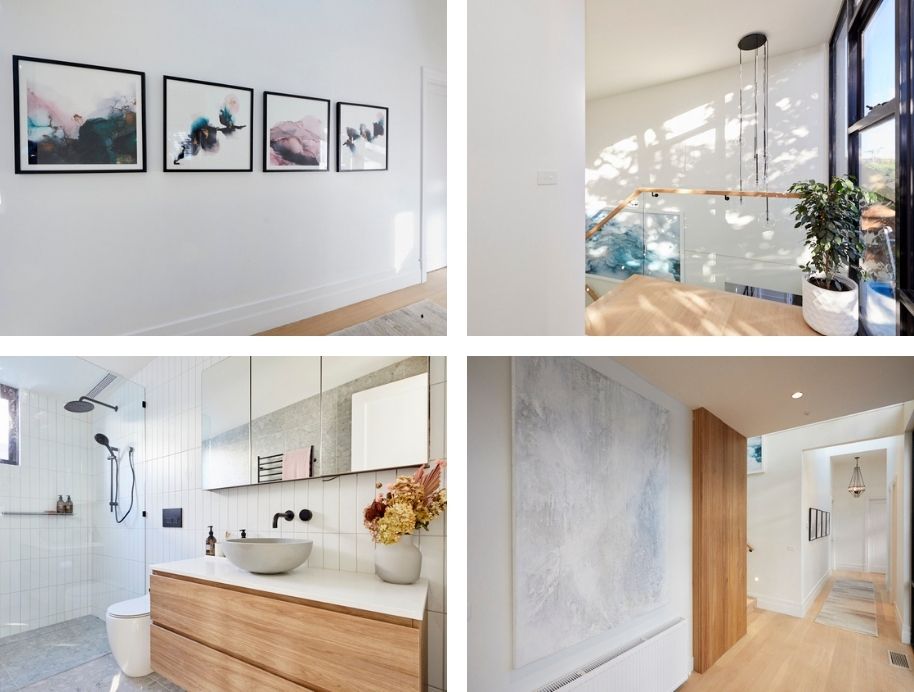 The painting wasn’t perfect according to Darren, but he understood why because there was so much to do.

Neale loved the Viridian glass on the restored door, that caused Harry so much pain during the week.

Another positive was the amount of storage under the stairs.

“You could have your cheese plater on the floor and grab a wine,” Shaynna said.

Overall the judges felt that some of the decorating choices by Harry and Tash left them underwhelmed.

Neale felt the artwork in the stairway should have been a portrait picture rather than landscape to accentuate the wall height.

With the laundry, it could have been more functional.

“The one thing that always gets overlooked is where are you going to put your ironing board, your broom, all those sorts of things,” Neale said.

While the hallway, stairs, laundry and foyer were OK, overall it wasn’t Harry and Tash’s best effort.

“I accept this house ticks a lot of boxes when it comes to natural drama, but it’s not enough for me today,” Neale said.

“It’s been a really stressful week and I was quite surprised by the judges’ comments,” Harry said.

“I can see why it’s called Hell Week.” 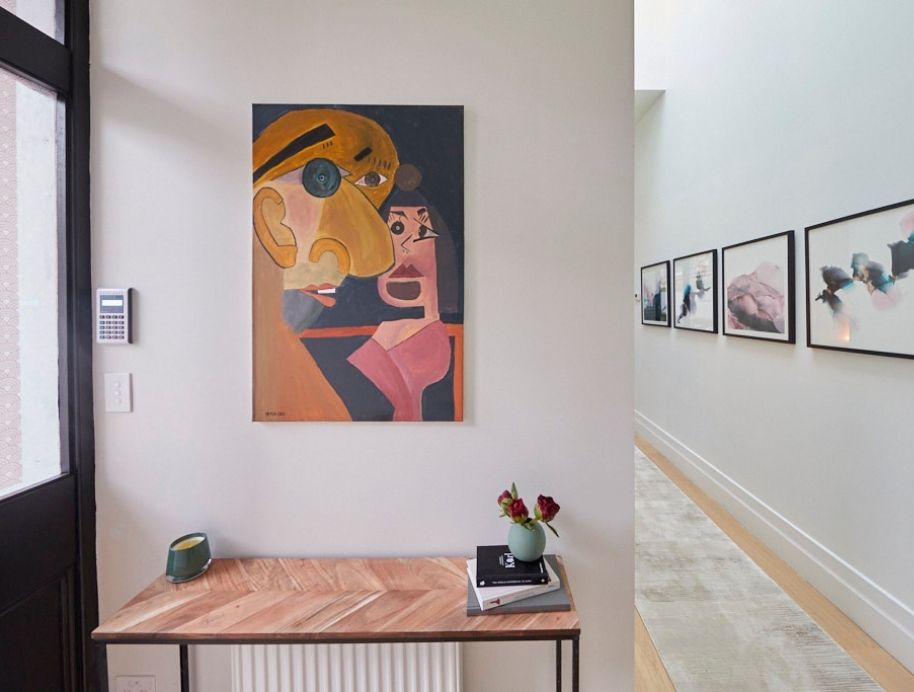 When the judges walked into House No.2 they almost immediately spotted the arch steel door connecting the old and new houses which was Sarah and George’s Suncorp game changer.

They were in love.

While the small table to the right of the entrance of the house was lovely, it got in the way.

The judges loved the vintage posters.

“They had me at the vintage posters,” Neale said.

Although he did feel there should have been one either side of the hallway.

The judges also felt there was too much colour in their hallway.

“Honestly if this was my house, I would really pair it all back,” Darren said. The powder room was really the hero of Hell Week for Sarah and George.

The wallpaper was described as “whimsical” by Darren.

Shaynna was also a fan.

“For me, this is faultless.”

The mudroom and laundry was also a success.

The biggest issue the judges had with Sarah and George was they felt none of the rooms connected.

For example, the colour of the floorboards and the staircase did not match.

“Overall there is a real disconnect in the house,” Shaynna said.

Sarah was again a bit deflated about the judges’ comments about the individual rooms not connecting.

“We are never going to be that couple that they absolutely love, and I get that,” she said.

Sarah told The Block Shop why the negative comments have such a negative impact on her.

“When you’ve put your heart and soul into something and then people tell you it’s bad or it’s not the best standard, it’s a punch to the ego,” she said.

“It is difficult not to stay in that rut.” 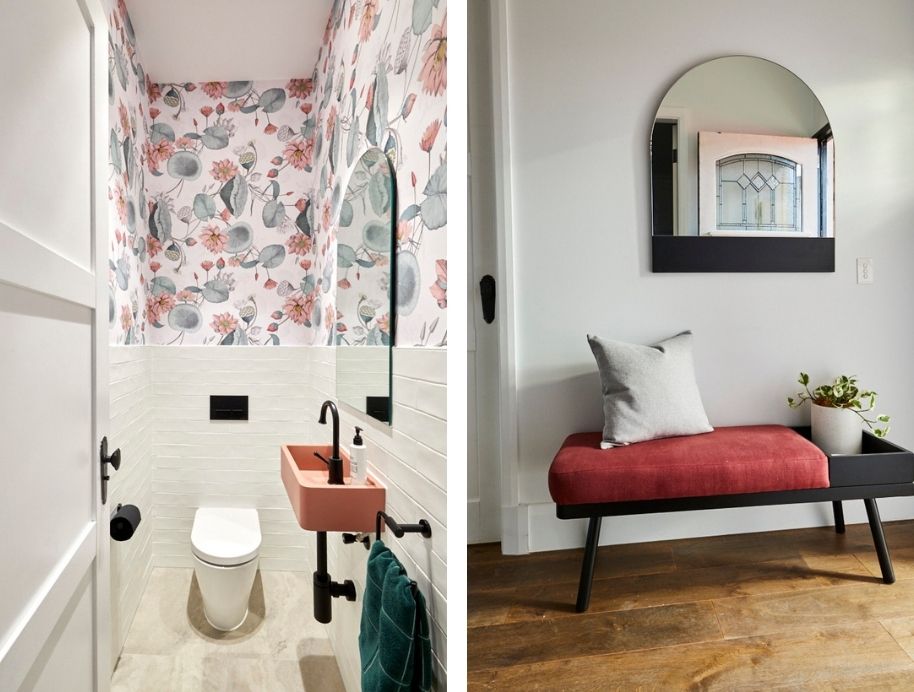 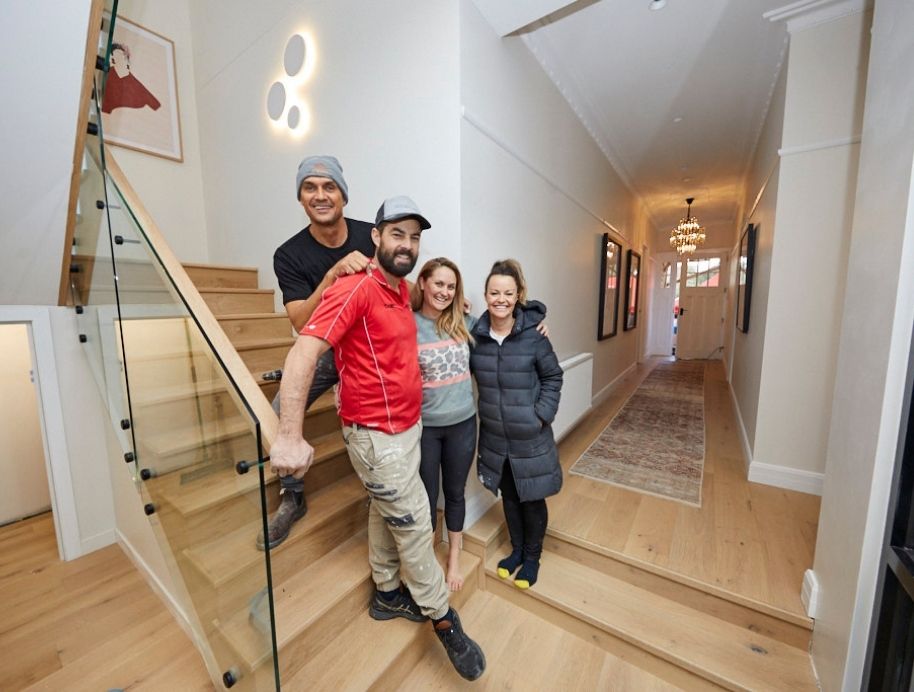 It’s probably not a word you really want to hear on The Block when it comes to judging, but Daniel and Jade in House No.3 heard it a bit last night at Scotty’s HQ.

Shaynna, in particular, used the adjective to describe their efforts this week.

“Vanilla sums it up,” she said.

Shaynna wasn’t a fan of the colour palette or the lack of any colour at all.

Daniel wasn’t too happy about the spaces being called ‘vanilla,’ as the South Australian farmers poured their heart and soul into the spaces yet again.

“We have watched many seasons of The Block, and Tess and Luke were told that last year and look what happened,” he said.

Some of the features included artwork from and lighting.

Initially, Neale thought the guys did a great job.

“It’s very simple, very elegant, they have allowed the period details to speak for themselves,” he said.

He was a huge fan of the sheers in the window up the top of the staircase.

Overall though after walking through all the spaces, he was disappointed.

“Don’t drop the ball at the last hurdle,” he said.

Darren was full of praise for Daniel and Jade and he loved the room.

“The simplicity runs through the spaces, am I the only one who sees it?” he said.

The only thing he didn’t like is the metal bowl on one of the consoles.

All three judges were a fan of the size of the laundry.

In summary, Darren loved what Daniel and Jade, Shaynna didn’t like it, and Neale was somewhere in the middle.

Heading back to The Block last night Daniel and Jade weren’t in the best of moods.

“We are trying our bloody best to create a room that we love, it’s hard,” Jade said.

Recap all the other Block room reveals HERE