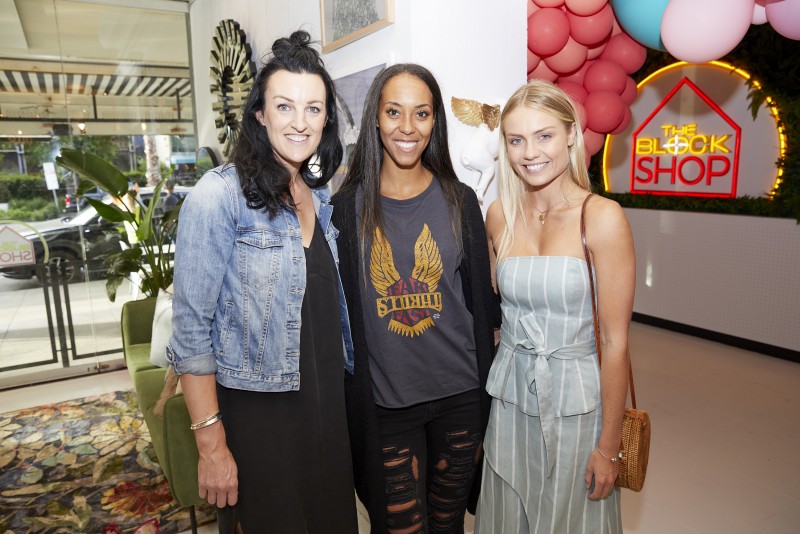 The Block Shop Melbourne opened its doors earlier this year on February 15, and celebrated with a party, attended by a host of ex-contestants, including Elyse (last year’s winner), Julia and Sasha (The Block 2016), Deanne Jolly (The Block Glasshouse) and Dani Wales (All Stars, Dorcas Street). Joining them were Scotty, Shelley and this year’s crop of Blockheads - which we can now reveal to you!

Three beauties standing tall! Gatwick contestants Bianca and Carla got some hot tips from Elyse, last years winner of The Block.
Scott Cam welcomed our new contestants from NSW, Sara and Hayden, to the Block Shop.

The Block Shop owners, Sarah Armstrong and Emma Garland and the team had reason to celebrate - it had been a mammoth undertaking to open the doors in time for our launch, which was filmed as part of this year’s show.

“It was such a race to get it all done,” says the shop’s manager Harrie. “I came onboard in January, and at that point the space was still a restaurant - and there was even a disco ball hanging from the ceiling! We had just a few weeks to rip everything out, paint it, and install all the products. In the end it was like we were doing our very own Block! We were literally putting the final touches to everything as the doors were opening for guests to arrive."

Welcome to The Block Shop! Which, can we say, looks nearly as gorgeous as last year's Block winner, Elyse!
Norm and Jess, our new loveable couple from QLD, enjoying a sneaky beverage
Bianca and Carla checking out the incredible artworks available at The Block Shop. I wonder if we will see any featured in their apartment at The Gatwick?
New contestants Hans and Courtney getting some tips from our Style Queens, Julia & Sasha.
Scott Cam keeping everyone amused at the official welcome party at The Block Shop, Melbourne.
New Contestants Kerrie and Spence from SA calling dibs to some artwork?
New Blockheads Kerrie and Spence chat with Insider Style guru, Shelley Craft, and former Block winner - and Block Shop fave - Deanne Jolly.

Stop by and have a browse at either of our flagship stores open now in Pitt St, Sydney and St Kilda, Melbourne.

Posted in Retailer Spotlight, The Block and Industry Insiders