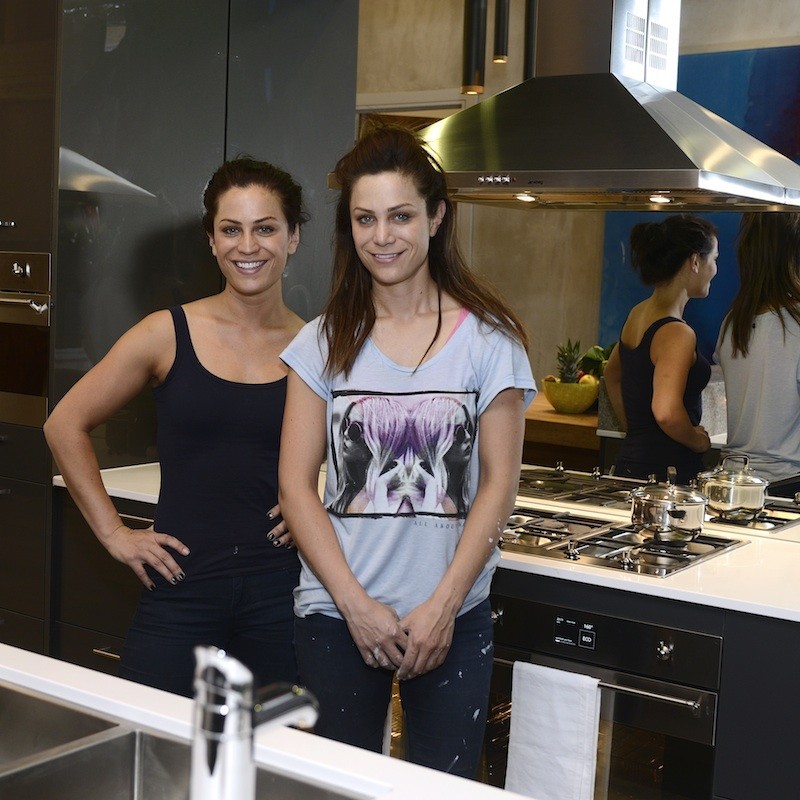 The couples delivered four top notch kitchens on Sunday night’s room reveal episode with the twins retaining their title as ‘The Kitchen Queens’ with a near perfect score of 29.5. Having won only one room so far and none of the weekly challenges, Alisa and Lysandra were definitely starting to feel the strain as they explained during the week that they would ‘need another $40,000’ to complete their apartment the way they wanted to.

Even though all the couples received high marks from the judges, Brad and Dale failed to really impress with their sleek white kitchen. The judges called it ‘dated’ and ‘cold’… ouch! Luckily, the boys did manage to pick up extra marks for their beautiful polished concrete floors and huge ‘statement’ artwork by artist-of-the-moment, Megan Weston.

Chantelle and Steve suffered from a major case of the ‘doubts’ this week, which is a very common occurrence on The Block, especially when you have to put a room together so quickly. They’ve come a long way since their first room and were worried that their kitchen design might not reflect their newly refined style. The Judges did like their kitchen, but felt there were a few minor functionality issues. Neale particularly liked the printed blind, which resembled a light box.

Kyal and Kara’s kitchen ticked most of the boxes for the judges this week because of its modern/industrial style. One of my favourites; there was so much to love about this space but above all else, the timberwork was amazing. The judges did comment that it may have felt a little‘masculine’, but to me it felt warm, inviting and somewhere that you would feel comfortable standing having a conversation, a glass of wine and cooking a nice meal.

But Alisa and Lysandra were the unbeatable team this week, with their grand galley kitchen which measured a whopping seven metres in length. Shaynna boldly exclaimed that ‘the girls are back!’ and all three of the judges were blown away with the ‘incredible sense of space’. Neale felt it was a very ‘contemporary’ kitchen that wouldn’t date and that he girls had ‘really nailed the loft brief’. I absolutely loved the effect the light void had on the space and can’t wait to see the impact this also has on their dining and living spaces.

I caught up with Lysandra to get the word on how her and Alisa are feeling at this point in the competition, to ask her about the ‘ins and outs’ of their winning kitchen, and for some handy hints and tips on renovating a kitchen on a budget.

Congratulations! This must be a relief for your both. How much does this win mean to you?
It means a lot! We lost our ‘The Bathroom Queens’ title and we definitely didn’t want to lose ‘The Kitchen Queens’ title [laughs]. We need the money and we needed a confidence boost also.

How are you feeling at this point in the competition?
Certainly our confidence isn’t high at the moment. Not having won a challenge and only winning one room, way back at the start. I mean we still think we are producing pretty good rooms, other than the bathroom…

Were you really not happy with the bathroom at all?
Oh we were happy enough with it, but we definitely think it needs a few changes. It wasn’t that we were angry that we didn’t win; it was just the really low scores that were disappointing for us.

‘Tradie’ issues plagued you again this week, I really feel for you. Do you feel like you have a functional team now?
Now that the Kitchen is done, yes I think so. It’s definitely been different to last year but I think we are confident that we have a good team behind us now. In some ways we feel we made the right decision [in letting their builder go] and in some ways we feel we didn’t.

I agreed with the judges’ positive comments about relocating your kitchen from the original floor plan. What was your thought process behind that, considering it was a decision you had to make in the first week on The Block?
Well when we got the plans and saw where the kitchen was, it didn’t seem to us like it was an obvious space to put the kitchen. We didn’t necessarily like the idea of the dining room being the very first thing you see when you walk through the front door. If we had of put the kitchen where everybody else put the kitchen then we would have put our dining room where our kitchen now is and it just didn’t feel natural. We were actually surprised that nobody else thought of it to be honest. It honestly just felt natural to relocate it to where we did. That’s now what you see when you walk into our apartment, a big open plan and really grand space.
When you look at Friends (the TV show) [laughs], their kitchens always seem to be the main focus and are really large and that is that New York loft style living. That decision was literally made within the first hour of first getting the plans.

The doubt you experience after being hammered by the judges can often be crippling (I know that first hand), but you girls pulled through and delivered a well-planned and well-executed kitchen. What was your design process and what did you want to achieve?
I think we wanted it to be modern, but we also wanted it to feel like a loft kitchen. So we went with appliances that we probably normally wouldn’t go for, they are modern, but they also have elegant handles. We also decided to use handles on all the doors and cupboards. We wanted it to be simple, that’s what we try to achieve with all of our kitchen designs because ultimately in ten years, we want the owner to still be able to have a kitchen that looks amazing. We are conscious of not going for any materials that would date really quickly. And we wanted it to be the centrepiece of the place because we believe that bathroom and kitchens alone can sell a property. At seven metres long it’s the largest kitchen to be on The Block. We also had another one metre piece that was supposed to be attached to the island bench but because of the confusion with the landing that we didn’t know about, we had to remove it, so it would have been even longer.

What do you think is clever about your design?
I think the galley-style kitchen is clever. Having it where it is in our apartment has ultimately created the feeling of space. I remember the boys saying early: ‘You’re not going to put your kitchen just as you walk in the door?’ and I think it actually really works. With our little breakfast bar that comes off the island bench, it’s clever as it’s something that we personally use all the time. The dining and living rooms are much more personal spaces and perhaps something you don’t want to walk straight into when entering an apartment. The second you walk into our apartment it’s all very open, and that has been the general feedback.

What do you think is clever about your design?
I think the galley-style kitchen is clever. Having it where it is in our apartment has ultimately created the feeling of space. I remember the boys saying early: ‘You’re not going to put your kitchen just as you walk in the door?’ and I think it actually really works. With our little breakfast bar that comes off the island bench, it’s clever as it’s something that we personally use all the time. The dining and living rooms are much more personal spaces and perhaps something you don’t want to walk straight into when entering an apartment. The second you walk into our apartment it’s all very open, and that has been the general feedback.

It’s often said that kitchens sell houses. What elements have you added to make your kitchen stand out from the other three?
We put a 200mm block of stone, which looks like concrete that is quite different and divides the space between working bench area and the breakfast bar. Also the thin 20mm stone bench-tops in white for the rest of the bench areas are quite different.  Our breakfast bar is nice and chunky at 50mm so all those elements add a different texture to the look but it all works nicely.

And what is your favourite element?
I love the lights and artwork. It’s not part of the kitchen but still the space would not feel right without it. We selected a print by an artist we liked and had it copied onto the glass and then fixed to the wall. We added a down light above it, so it reflects the light really beautifully into the rest of the space. I think it’s beautiful and without that piece of art and the lights then the kitchen would not look as half as good as what it does. As you walk through the front the door and into the kitchen, it is the instant wow factor. The colours really compliment the kitchen.

What did you think the other couples did well in their kitchens?
I really liked Kyal and Kara’s kitchen; it was simple, nice and completed to a really high standard. Their timberwork on the pantry was done really well. It’s a pretty big kitchen but they have a smaller space for their living and dining. I actually thought the boys were in with a chance this week but they didn’t really get very good feedback at all. I was really surprised. Steve and Chantelle’s didn’t feel as functional to me, it’s very large and spread out so might not work as well as the others.

That light void! How open and grand does it makes that space feel? Are you concerned about the loss of space to the second level, or do you feel that the benefits outweigh that?
That was definitely a concern of ours when we first decided to do the void; it meant that we would have a smaller space to work with upstairs. But, I think that the benefits far outweigh that. Essentially it creates that loft feel, if it weren’t there it would feel just like an apartment. To me, I don’t necessarily think the other apartments have that loft feel. In saying that it was a massive pain in the bum, it cost nearly $10,000. But we spend 90% of our time on this level so the loss of space in the master bedroom doesn’t really concern us.

Do you have any more surprises in-store for the judges this series?
We have some pretty amazing plans in store for the living and dining rooms so hopefully they like what we do there. We are the only apartment that has a separate formal dining area so we are excited to work with that.

What are your top three tips for people who are renovating a kitchen on a budget?
1.Select materials and finishes that won’t date quickly. Always think about potential resale. You can never go wrong with white.
2. It has to be functional. If it’s not; what’s the point in spending all that money if it doesn’t function properly as a kitchen?
3. Keep it simple and don’t go overboard. Try to allow for quality appliances in your budget, because if you don’t you will only wind up replacing them sooner anyway.

The Home Journal is an Interior design and Lifestyle blog by Dani Wales, fomer contestant on The Block.  Check out her blog for more inspiring articles.