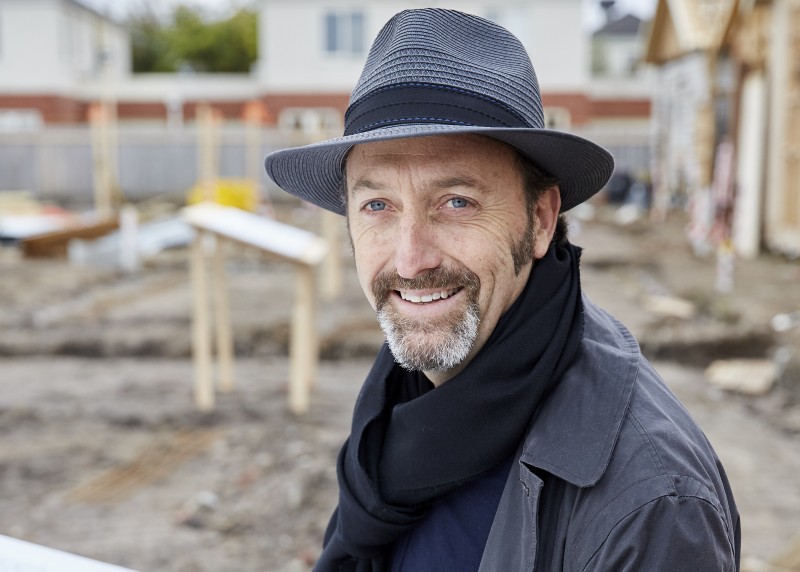 /media/blog/Julian_Brenchley-01.jpgjulian brenchley“It all started because I just wanted to find somewhere new to put the bins”

This is the second time in ten years Julian Brenchley has renovated his Lower North Shore home in Sydney. The first was back in 2009, when he was simultaneously working on the third series of The Block, in the affluent suburb of Vaucluse, and tinkering with his own home.

So why the need for the do-over?

“It all started because I just wanted to find somewhere new to put the bins,” Julian laughs.

“All from just moving my bins!”

When he bought the house in 2009 was neat but in great need of an update.

Fast forward, and this most recent work - though it started from humble intentions - has morphed into a fully-fledged family renovation, which will eventually include five bedrooms and a totally re-imagined living area.

While it will end up looking completely different, interestingly, Julian says in the years since he last worked on the house, his own tastes haven’t changed too substantially.

“There is a bit of consistency there,” he explains. “Decisions we made for finishes we will probably use again - wall paneling, some lighting choices. It will be a new build - but they weren’t bad decisions that we made back then

Usually Julian is working to clients’ briefs - be they private, or properties he’s worked on through The Block - but this time, it’s his own family who are calling the shots.

“I draw a line on a piece of paper - and then I’m told to put it somewhere else,” Julian laughs. “Let’s just say The Chairman of the Board - my wife, Bek - has definite opinions about things!”

Julian admits it’s also been tricky trying to design something for himself as client - there are just too many things he wants.

“As a professional, doing your own place, you just have to get on with it,” he explains. “Because there’s always the ‘latest and greatest’ new thing, or house envy, and all those things come into play. So you just have to nail it - and run with it.”

Julian and Bek have three children - and a dog - each of whom is catered for in the new plans.

It was time for this old shed to go!

Their oldest daughter is 17, and likely to be in and out of the family home in the next few years, so it is important the new space reflects these changing circumstances.

“I think the success of modern housing design is flexibility,” Julian explains. “So if she decides to come and go as a young adult, there’s a room with a bathroom that she can evolve into later, if that is how it pans out.”

Demolition has been completed, and the slab was recently laid, “so we will be getting into the framing now, which is the more interesting part,” Julian explains.

So what can we expect of the end design?

“The building is 1920s. It’s not heritage listed, so we could have knocked it down if we wanted to. But it has a charm, which we are working with,” he explains.

“It’s a bungalow, of sorts, so we are using that, and doing a more modern addition out the rear.

“But it’s not a clinical glass box - I feel like it’s got a bit of vernacular 'Australianness' to it. “‘Coastal’ is one word my wife likes to use, but I’m not sure I agree with that. It’s a relaxed family home. I don’t know whether there is a style in that - maybe contemporary Australian?”

But what exactly constitutes “vernacular Australianness”?

For Julian, it’s materials. “We are using some fibre cement sheeting outside, and some face brick, so I think the raw materials will tip towards that, rather than the ‘ticky tacky’ rendered blue board,” he says. “We are trying to avoid that. “

This decision is also a practical one.

“Actually, I’m trying to avoid painted finishes on the outside,” Julian explains. “Because I have got better things to do on a Saturday than paint the house!”

Posted in DIY, The Block and Industry Insiders