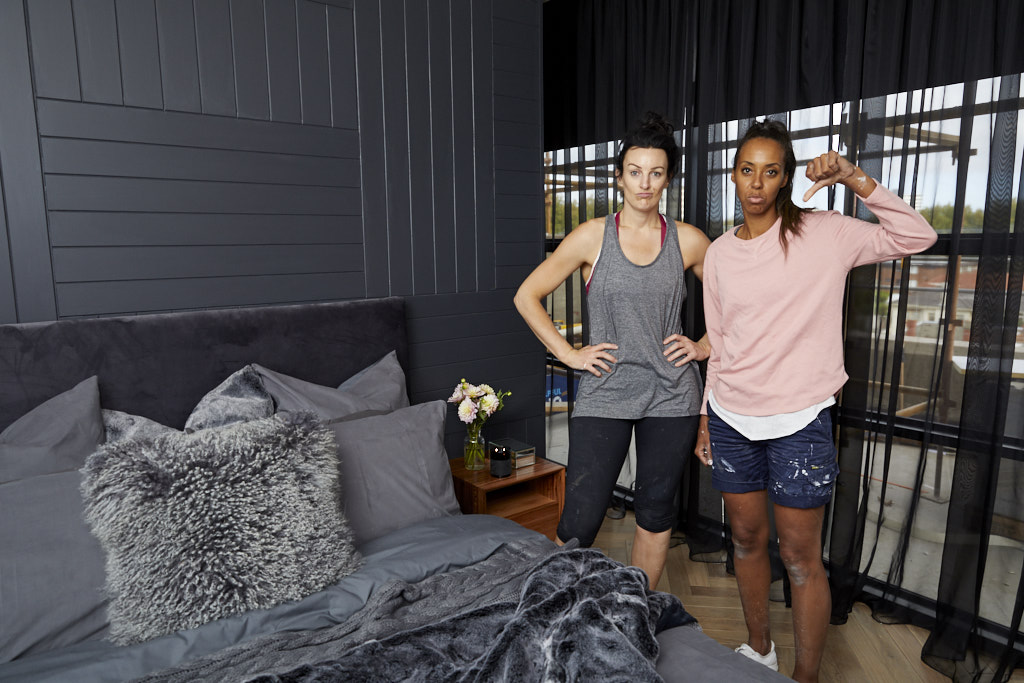 This week, our teams are renovating their second guest bedroom. Not only that, they’ll also have to re-do one of their less successful rooms from weeks past. So who’s doing what, and why? We take a look at the rooms that are up for a re-fresh this week...

The Queenslander will be re-doing their living/dining area - the biggest space to be getting a going-over in any of the apartments this week. It will be the perfect opportunity for them to look at re-positioning that tricky fire-place, which Shaynna said boasted “the worst placement of a fireplace” she had ever seen.
Ouch!
“We’re pretty lucky, because we’ve already got our furniture, and our lights, but the big one [will be] the wood heater,” says Norm.
So what will become of that problematic “tonsil”? Stay tuned!

What will Norm and Jess do with the fireplace?
HAYDEN AND SARA

Hayden and Sara are re-doing their first guest bedroom this week, a room which was slammed by the judges for its design flaws and for being “too dull”
Sara admits she’s a bit confused - should they install a study, or a sitting area? After all, Greville Pabst had already told them their re-styled sitting retreat was a misfire, saying he could see “a nice little study area.”
Sara has some big decisions to make.

Should they install a study, or a sitting area?
BIANCA AND CARLA

The girls had the simplest task this week - re-doing their master bedroom. Or, more specifically, re-doing that badly executed timber feature wall above their bed.
It was Darren’s feedback that persuaded them they needed to fix it.
“It’s a great idea, but if you are going to do it, make it fire, and make it perfect.” he told them.
Thankfully, Carla has a plan.
“We are going to plaster over the feature wall, so hopefully that will be the easier of the two rooms,” she says.

What will it look like after they have plastered over the badly executed timber feature?
KERRIE AND SPENCE

The couple from the Barossa were surprised to find themselves re-doing their living/dining area. “The styling feels a bit nineties, a little uptight and needs to loosen up,” the judges told them. And after some reflection, Kerrie agreed. Hopefully it will be a quick fix - she just plans to change some of the artwork, and “give the space a schuz”, and she hopes that will suffice.

Kerrie is going to “give the space a schuz” we cant wait to see it after...
COURTNEY AND HANS

Neale was scathing of their master bedroom, saying, “there’s nothing in here that makes me want to buy this apartment”. Tell us what you REALLY think, Neale! So it came as no surprise to the WA couple that their main bedroom space would be the one getting a makeover. First to go? That artwork. But what to pop in its place? A trip to the Block Shop is definitely the order of the day, methinks...

What will Courtney and Hans do with their massive master?