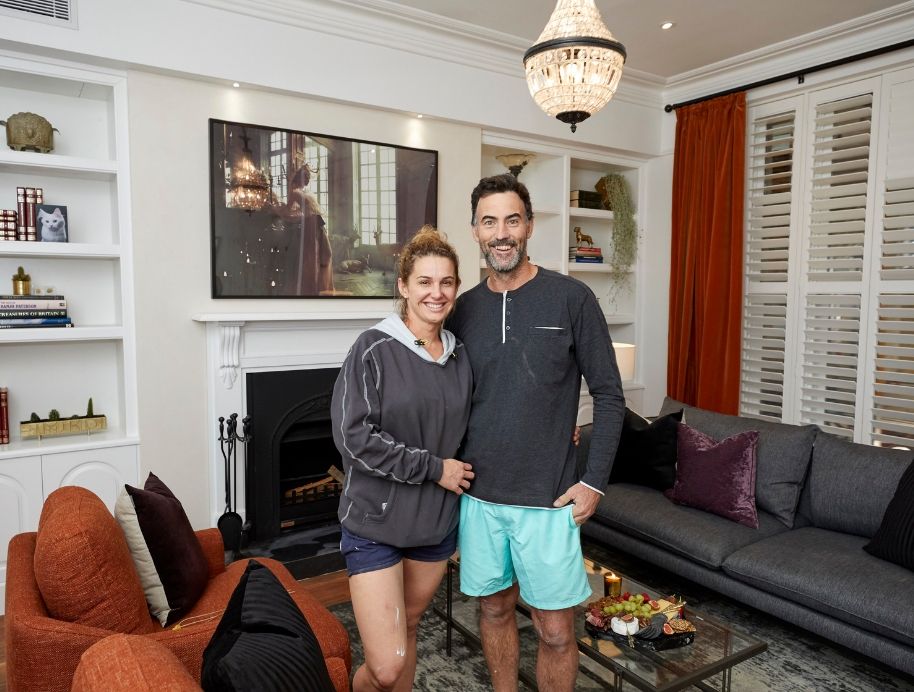 We take a look inside the contestant's formal lounge rooms

Matt and El’ise went all-out to showcase stunning heritage details in their room, opting for oversized cornacing, an ornate ceiling rose, and even an arch and corville in the hallway.
It hit all the right notes - and they won the room, scoring a near-perfect 29!
Shaynna especially loved the room.
“Um, excuse me, love, love, love!” she said upon walking into the space. She particularly loved the couple’s colour palette, and their use of burnt orange drapes over plantation shutters, the two burnt orange occasional chairs, the cabinetry with colonial details and the working fireplace.
The judges also loved the venetian plaster on the walls, which they felt showcased the room’s best attributes, including the placement of those stunning high-fashion photographic prints.
They all said the room had a lovely homely feel, and that the grey lounge paired with the grey rug and two side tables made for a cozy feel. The inclusion of a deco-style drinks trolley also made it functional, and the judges said they could imagine guests wanting to stop and stay awhile in the inviting, yet deluxe, space.
Neale thought El’ise and Matt had “told a grat story,” one of sophisticated luxe, but in a useable family space.
“It feels like a home,” he said, pointing out that that feeling is something usually built up over time. “You rarely capture that in a brand new room,” he said.
Darren pointed out that the Oslo was built during the Gold Rush era, and he said the room felt like it captured the opulence and wealth of the period. But it was Shaynna who had the last word on this winning room.
“This couple’s sense of romance and heritage just excites me,” she said.
And we agree - we can’t wait to see what you guys do next! Congratulations! 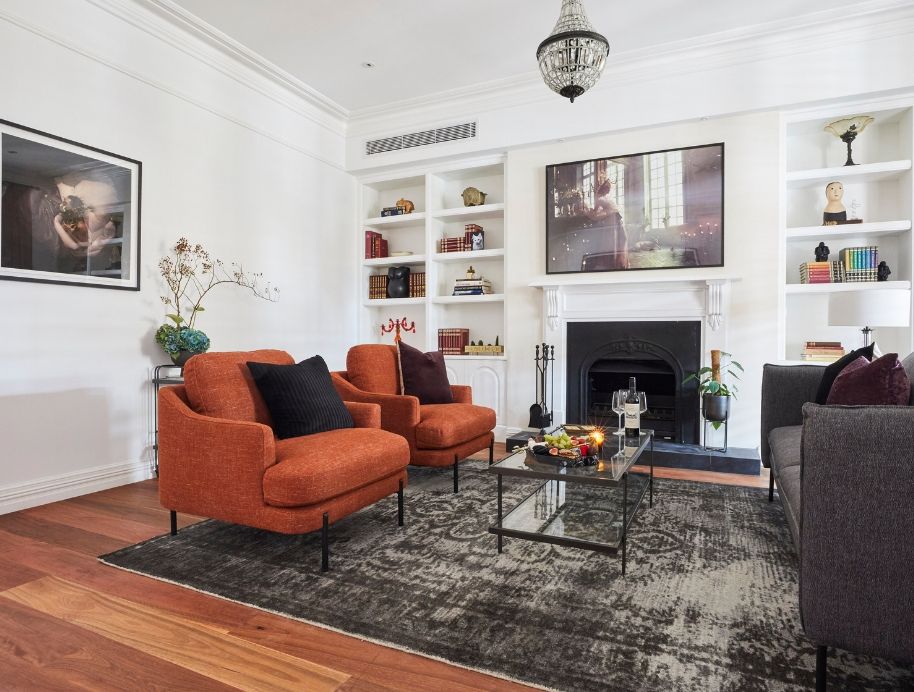 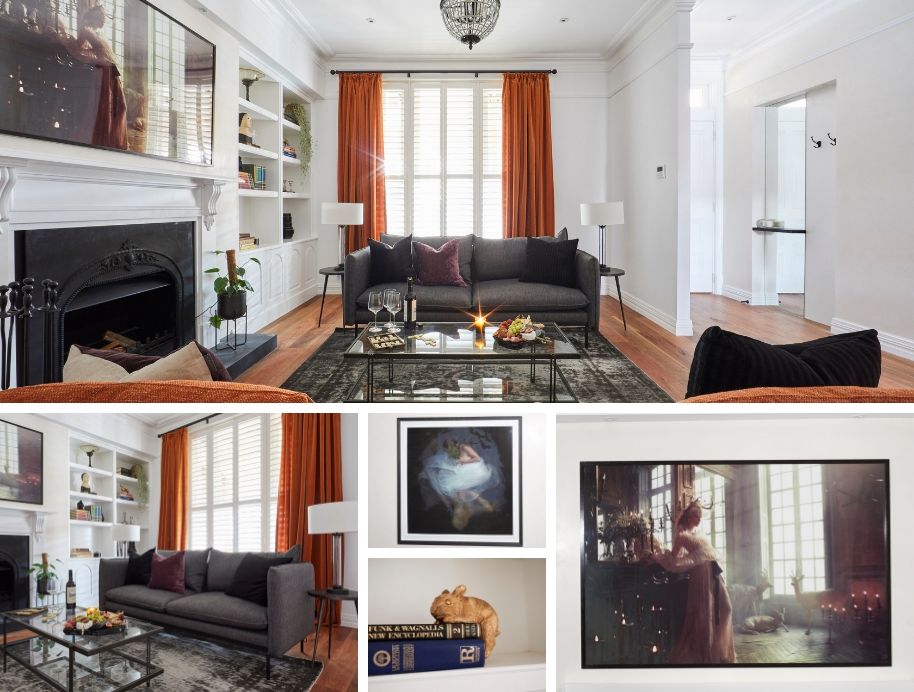 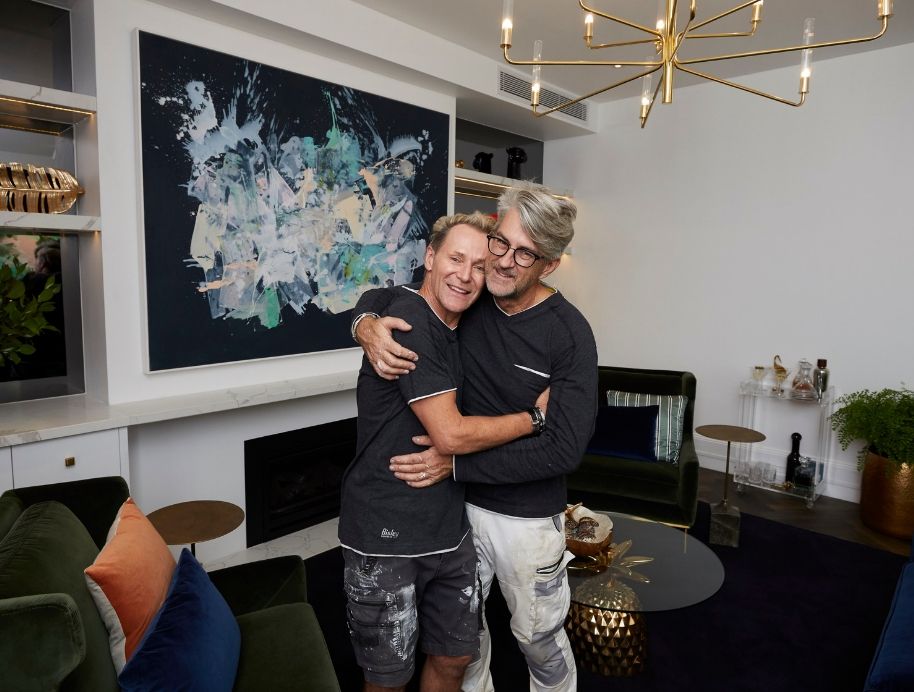 Inside Mitch and Mark's Formal Lounge
We take a tour of their sumptuous, 'Old Hollywood'-inspired space
SCORE: 28.5/20

Mitch and Mark created a sumptuous formal lounge using blues, greens and burnt oranges, to imbue their space with a gorgeous old Hollywood feel, only narrowly missing out on a win by half a point.
“It’s a room I would want to have,” said Mark ahead of reveal.
The judges agreed.
“Honey, I’m home,” Darren Palmer said upon stepping inside. He loved what they did, especially the colour palette, and the couple’s decision to use royal blue inlaid carpet with a blue velvet couch and two green velvet occasional chairs.
Shaynna agreed, saying she was loving the guys’ sense of colour - especially their use of spiced orange, which they styled to great effect through their drapery.
“When was the last time you saw this colour used in curtains?” she asked.
The judges loved Mitch and Mark’s use of whimsy in the room, and the placement of their glass and bronze ‘pineapple’ table, as well as the art deco long feature table with two reading lights, the large brass planter - complete with oversized Maidenhair Fern - and that quirky torso vase.
“It’s lush and over the top,” Shaynna said. “But I love it.”
The only thing Darren Palmer wasn’t a massive fan of was the marble-look cabinetry, but the rest he absolutely loved - and so do we!
Well done guys! 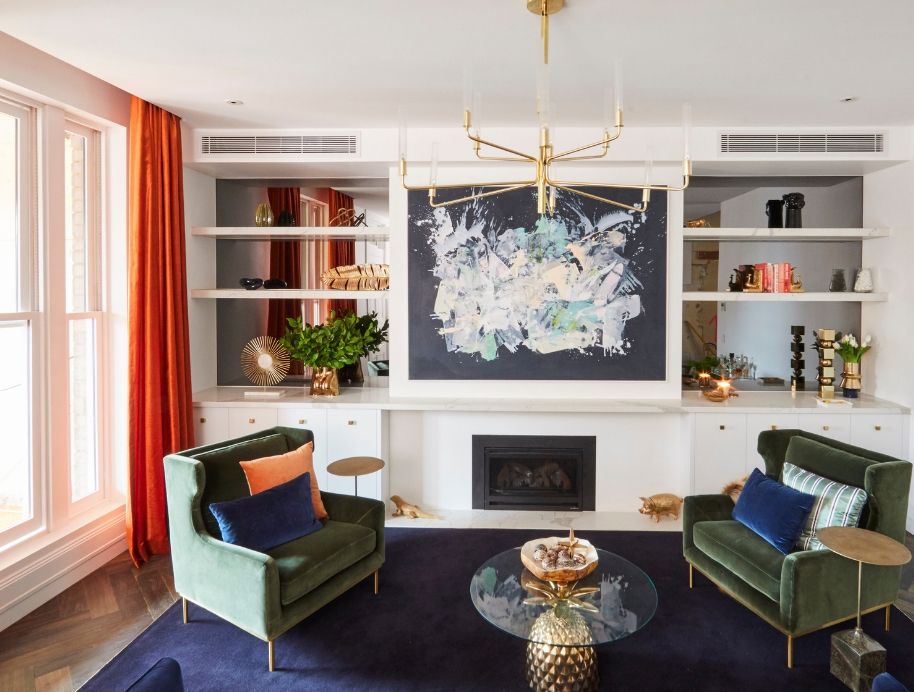 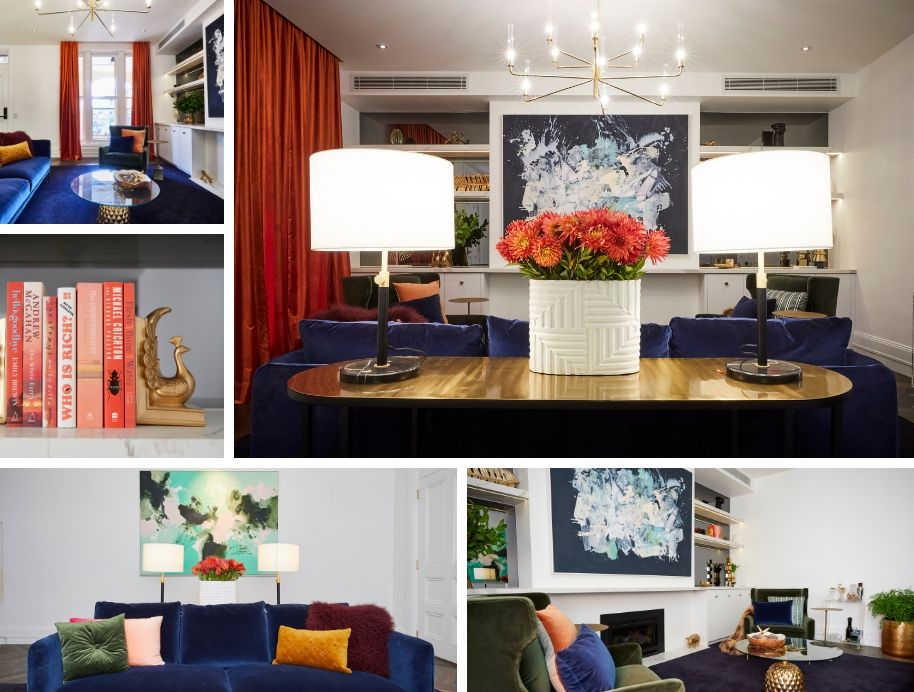 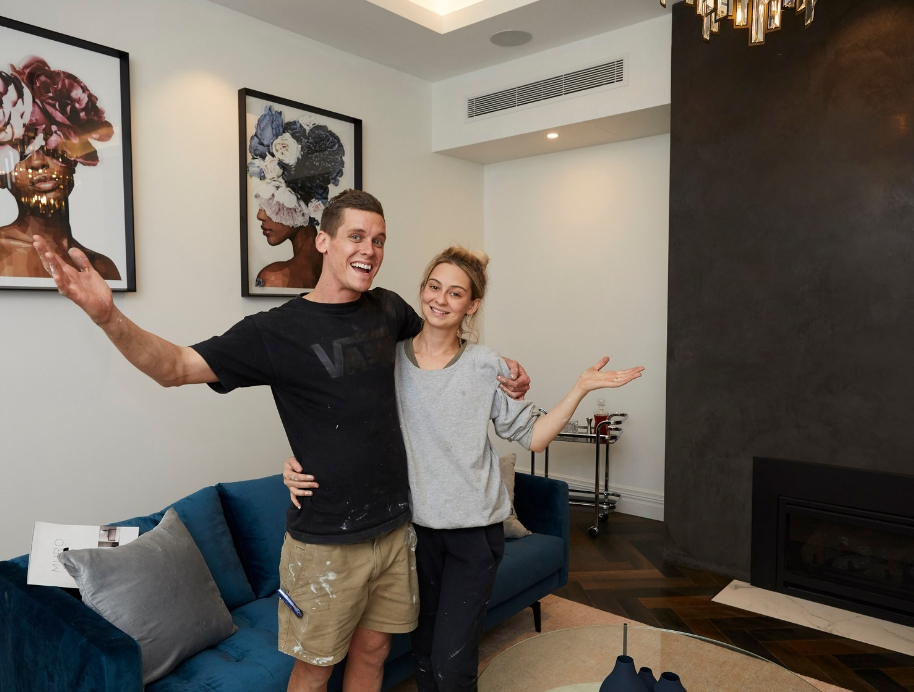 Inside Tess and Luke's Formal Lounge
We take a look at the young couple's simple, yet stylish, space
SCORE: 22/30

Tess and Luke had the week from hell. But they pulled out all the stops to deliver a pared-back, yet stylish, formal living space, complete with a black feature fireplace, white diaphanous floor to ceiling drapes, that gorgeous sunken ceiling, blue velvet couches, a decor-style circular table, and two architectural peach-coloured occasional chairs.
The hero piece, in Tess’ eyes, was that understated, yet magnificent deco-style chandelier. “It’s my favourite thing in the room,” she said.
The judges were impressed.
“It’s another ‘wow’ room,” Neale said upon stepping inside their space, which worked beautifully with the hallway, lined, as was the room, in stunning parquet-style flooring.
“I love the flooring,” Darren agreed. “I love that we’re seeing a herringbone pattern with a matte finish.”
He also liked the colour scheme, with Neale agreeing, saying, “It’s modern, but it’s got a sense of grandeur about it. It feels like it fits the heritage of the house.”
Shaynna was concerned the young couple hadn’t quite got the mix of artwork correct, and suggested lowering the chandelier height, giving the room a centralised focal point. Neale agreed, saying the space was a blank canvas, “but a very elegant blank canvas. I want to come in here and finish off the room,” he said.
The judges were pleased with what they produced, noting they’d done an excellent job under such trying circumstances.
And we agree - well done guys! 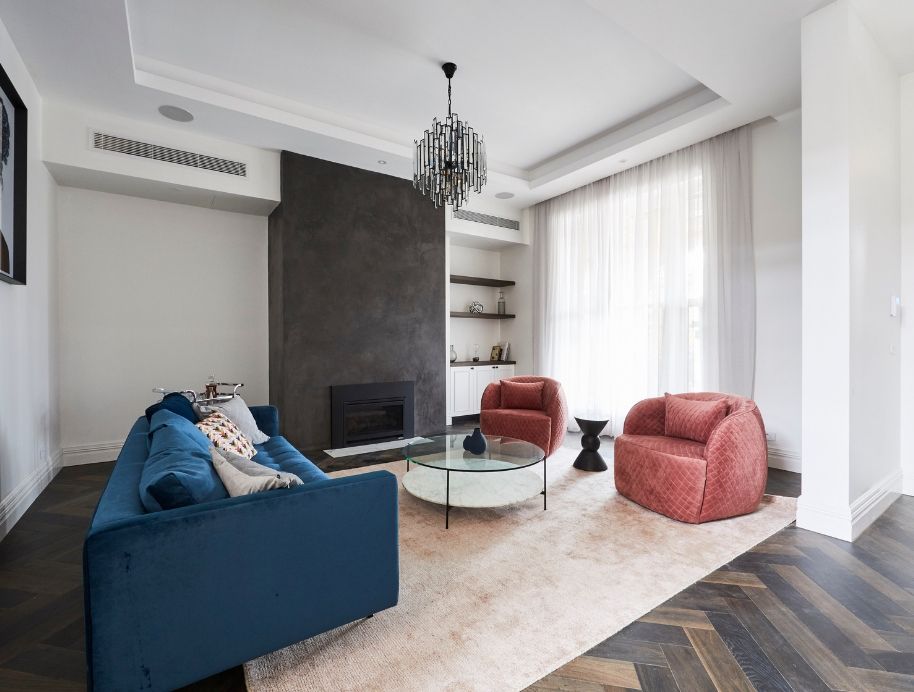 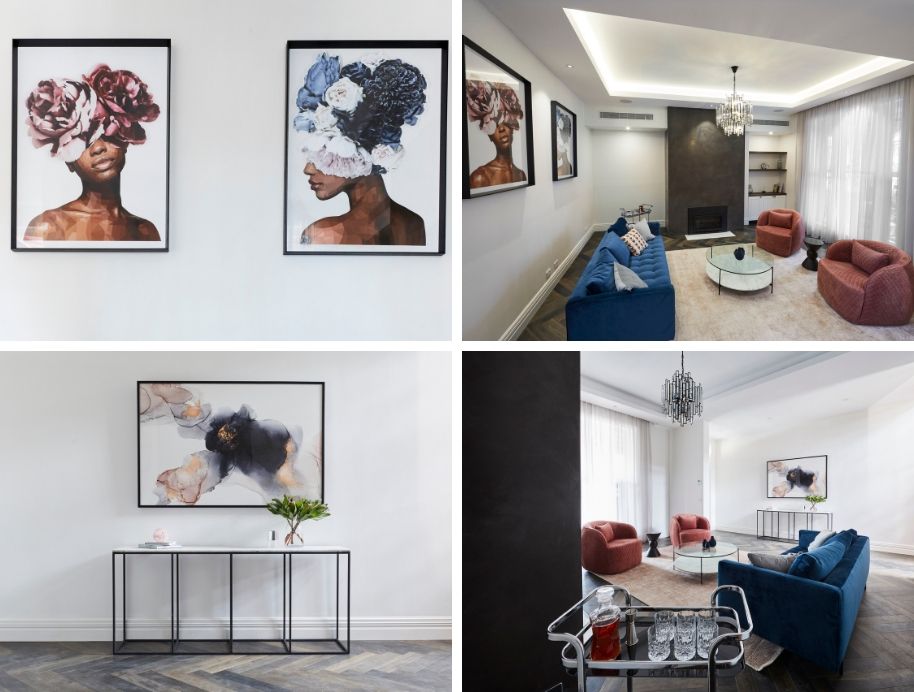 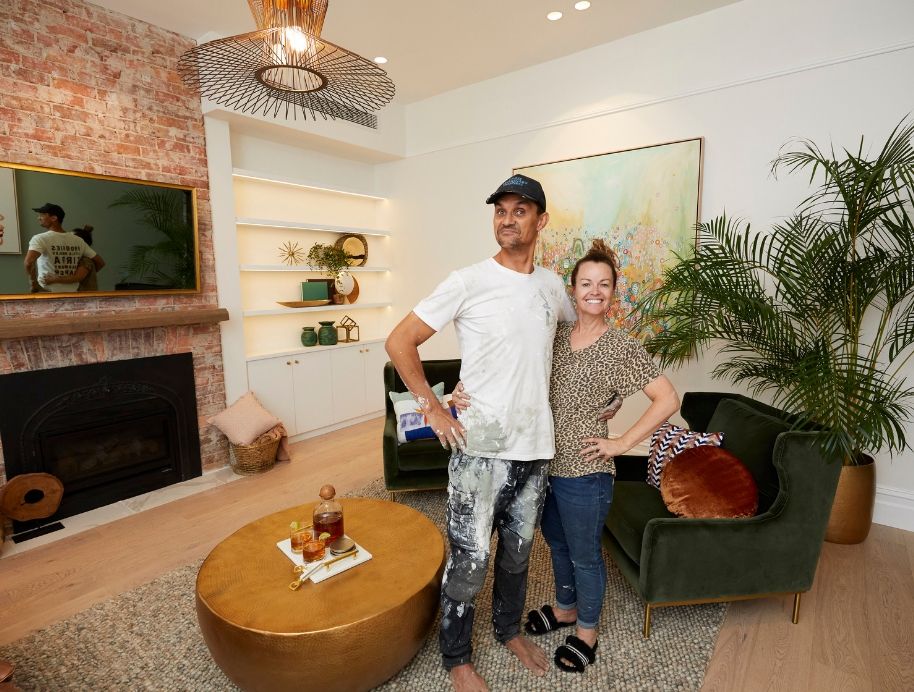 Inside Andy and Deb's formal lounge
We take a tour of their gorgeous, light, bright and relaxed space
SCORE: 25.5/30

Andy and Deb went for a light, bright “coastal luxe” vibe in their formal lounge room, offsetting their room with that stunning green feature wall in the hall, a feature which showcased their artwork to great effect.
All the judges loved it.
“I love the use of that colour - it’s just beautiful,” said Shaynna upon stepping inside.
The wall provided a lovely contrast to the space, which featured exposed brickwork above the fireplace, white cabinetry, a brown leather couch and two green occasional chairs. Their stunning use of art was noted by the judges, who said their choice of hero piece by artist Jonathan Gemmell was genius.
“The colour of the artwork and the vibrancy, it goes with the colour of the chairs really well,” Shaynna noted.
She liked the fact the couple had scaled up by using oversized features in their room, like the large copper coffee table, the large artwork, the size of the chairs and that enormous palm.
Neale agreed, saying he liked the fusion of styles in the room, and that there was still a sense of “colonial”, to fit with the heritage of the building.
Despite the fact the couple mixed a Scandi aesthetic with mid-century pieces, like those two structural pendant lights, and even some art deco styling, it mattered not, as their space worked well as a whole, and felt like a great first impression for the house.
We can’t wait to see what you do next, guys - well done! 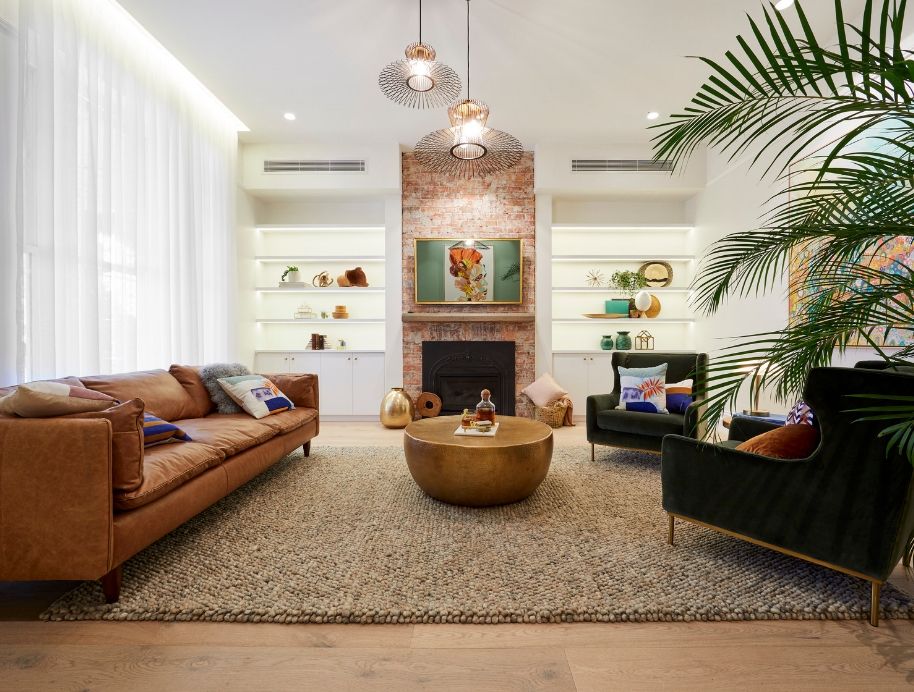 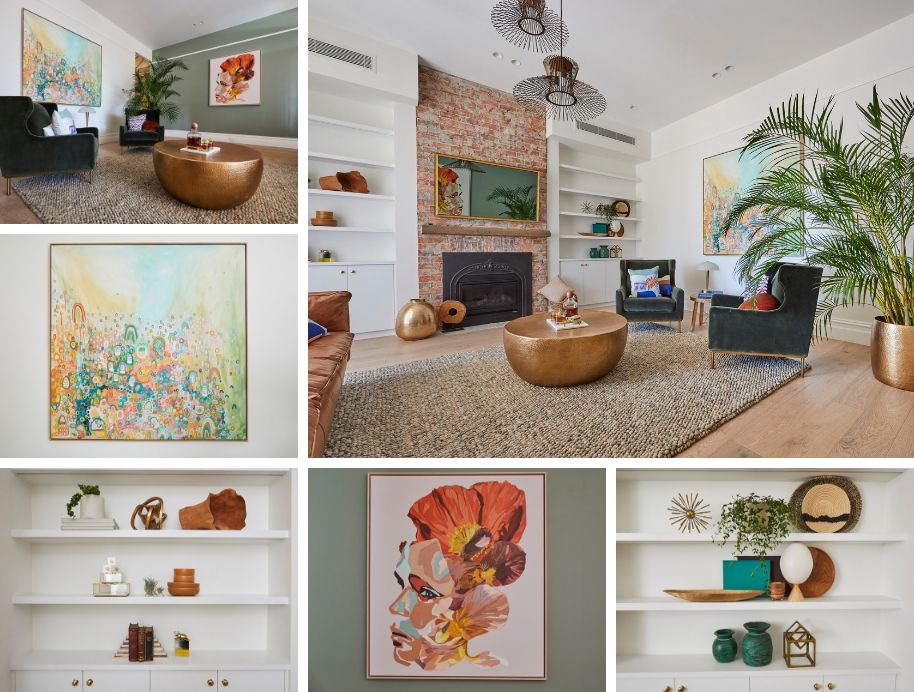 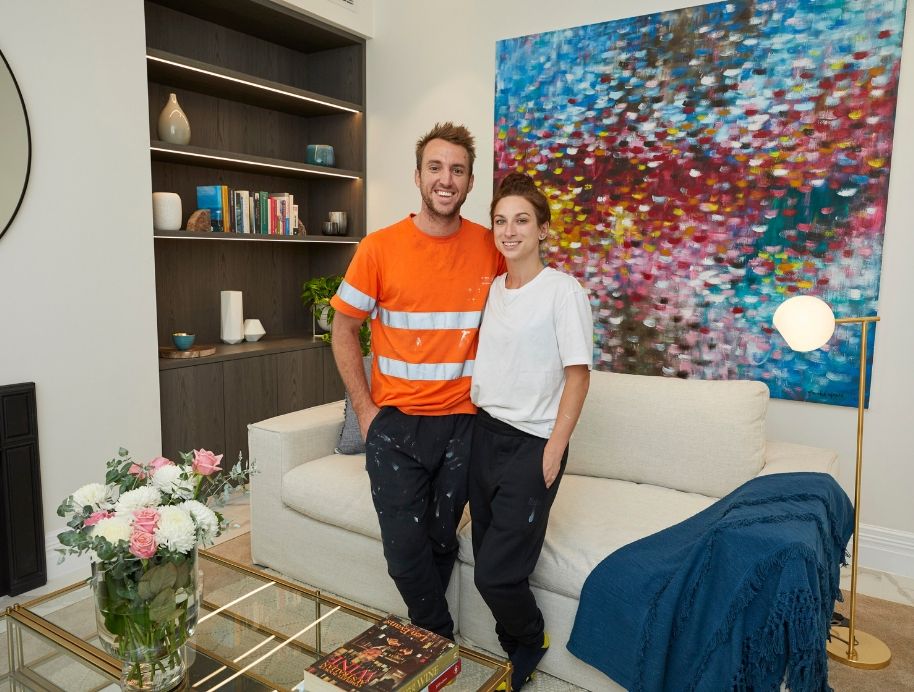 Inside Jesse and Mel's formal lounge
We take a tour of their elegant, no-expense-spared space
SCORE: 23/30

Jesse and Mel were going for a “Toorak” sense of opulence in their St Kilda terrace - and boy did they deliver. Spending $30,000 on the room, they went all-out, investing serious money in some stunning brass-inlaid double doors, a sumptuous chandelier, large-scale artwork and striking dark-coloured cabinets.
Two green occasional chairs were the heroes of the room, offsetting the white couch and white rug, which were placed to give the room a relaxed, yet elegant feel.
Darren was a fan.
“It’s very grand and very stately, and I think it works really well,” he said.
Neale appreciated what they were trying to do, but said he felt it didn’t feel as “homely” as some of the other rooms they had seen - perhaps a good thing, if the couple are trying to attract an investment buyer on auction night?
There were touches of federation in the room, but they also used deco features, like the round brass lamps and brass coffee tables, to lend a sense of old glamour to the room.
All three judges loved the placement of the contemporary pendant light with federation ceiling rose, but Shaynna thought their use of a marble feature tile around the perimetre was a step too far.
For their part, Jesse and Mel are standing by their design decisions. Will their bravery pay dividends on auction day? Only time will tell 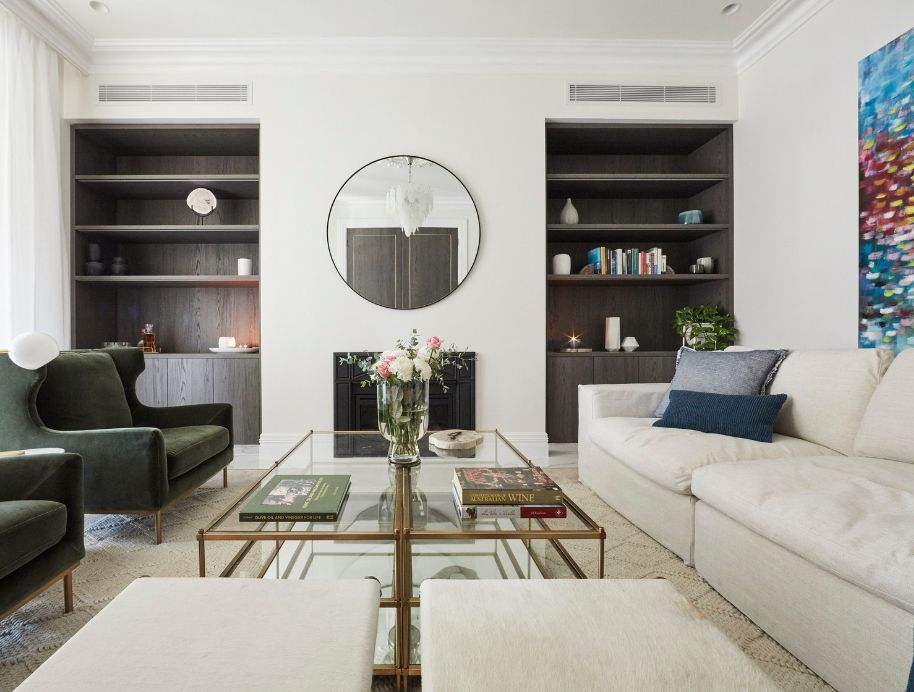 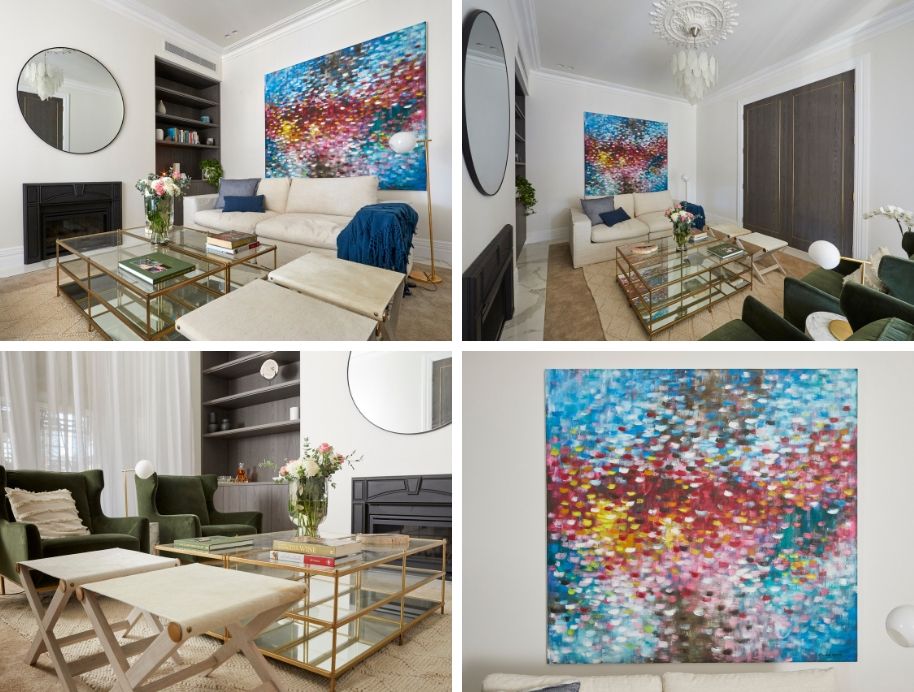