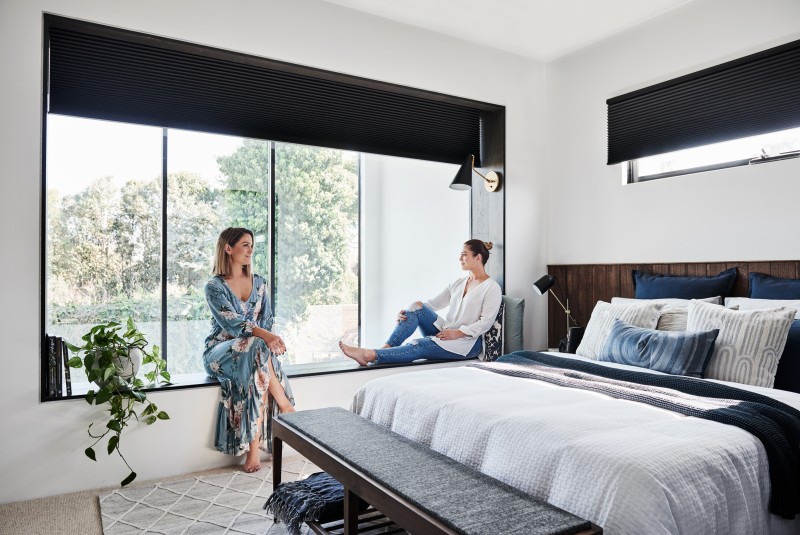 What an incredible oasis Alisa and Lysandra created in the ensuite bathroom. (Photography: Lisa Cohen)

Winning The Block: Sky High, “completely changed our lives,” says policewoman turned professional designer Alisa Fraser who took out the series with twin sister Lysandra in 2013. “We’ve got our own business, it’s allowed us to do our own flip, and we’ve created our online series. Nothing is the same.”

Now the Adelaide sisters’ biggest project yet has hit the market: a complete overhaul of an 1890 Victorian terrace in Albert Park, Victoria, which they have documented for their own online series, The Design Duo.

We are loving the colours the girls used in the master suite. (Photography: Lisa Cohen)

Having purchased the property in March 2017, building only commenced after a full year of planning, designing and waiting for council approvals. “We didn’t settle on anything until we were 100% sure that we had gotten the floor plan exactly right,” says Alisa. In the end, “We pretty much demolished everything except for the two front rooms. We’ve essentially turned a single frontage heritage building with two bedrooms, one bathroom and a single living area into a three-storey home, complete with three bedrooms, two living areas, a wine cellar and cinema room.”

Movie night anyone? What a home cinema! (Photography: Lisa Cohen)

So how does it compare to The Block? “Give me The Block any day!” says Alisa. “The Block’s over in 15 weeks. This has consumed my life for two years. I’m exhausted.”

Still, their reality show stints— they were runner-up in Fans vs Faves in 2014— have come in handy. “Since finishing The Block, we’ve kind of settled into our roles a little bit more,” says Alisa, who says she handles more of the backend, website business while Lysandra spent more time on site. “We actually worked really well each other. With your twin, you don’t have to pussyfoot around.” But being identical did have its drawbacks: “Our tradies still couldn’t tell us apart by the end of the build. It got a bit confusing at times.”

The property, with high-end fittings and fixtures and a design that embraces the latest trends and technology, hit the market on Oct. 24 with a price guide of $3.8-$4 million. “There’s a lot of serious interest,” says Alisa. “We just need to sell the place now!”

Posted in Home Inspiration, The Block and Industry Insiders